“Traumatic experiences...you either write about them or you dwell on them,” said Gino Gonzalez, a detention officer at CoreCivic’s Otay Mesa Detention Center in San Diego, which houses 1,700 detainees for Immigration and Customs Enforcement and the U.S. Marshals Service.

Gonzalez, who has been writing ever since his own traumatic experience at the age of 16 when he lost both of his parents, knows firsthand the therapeutic benefits writing can bring.

During his first week at CoreCivic in June 2019, he read a few of his poems to detainees around him. When he finished, they applauded and asked for more. For the rest of the week, he read aloud to an audience of detainees each morning before breakfast. They were so moved that they asked if they could submit their own writing to Gonzalez.

“Once I put the idea up the chain of command, I happily received all the attention and support I needed from the facility’s leadership to start the program,” Gonzalez said.

He started the creative writing and poetry program in one pod with about 15 detainees, and the program quickly grew to 50 participants. Today, all 18 pods in the facility participate in the program.

“Writing gives them a unique way of healing,” Gonzalez said. “Many detainees left terrible situations to come here, and this gives them the opportunity to express what’s in their hearts in a healthy, constructive manner. It allows them to demonstrate their talents and experience the talents of others.”

How the program works 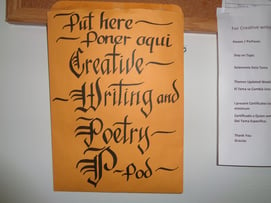 Gonzalez assigns each pod a theme and a deadline of one week for submissions. The first theme was “What does time mean to you?” Other themes have included family and patience. One detainee who is a calligrapher created eye-catching “Creative Writing and Poetry” folders for each pod bulletin board to collect submissions. Gonzalez estimates that 75 to 80 percent of detainees contribute to each theme.

The submissions come to Gonzalez in many languages, and most are translated into English by a fellow detainee before they’re submitted.

The writing is not critiqued, however.

“The joy of the process is just letting detainees write and express their emotions and personal stories, and then listening to the heartfelt expressions of others as their submissions are shared,” Gonzalez said. “It’s been cathartic for all of us.”

On his own time, Gonzalez creates certificates for each person who submits a piece of writing, and he holds a weekly awards ceremony in the Detainee Pod Day Room. At the ceremony, Gonzalez or the detainees themselves read submissions. Sometimes the detainees’ case manager, unit manager or pod counselor will attend the ceremony, and facility leadership will often select a first, second and third place winner from among the submissions.

“This program allows us to write and express ourselves on how we feel towards the topic,” said one detainee who participates in the program. “What we enjoy most about the program is that we get acknowledged in front of our peers — the clapping and whistling, showing appreciation. Since this program started, this has helped me in numerous ways, but most of all giving me self-confidence.”

Recently, the program has begun to include short story writing, offered to a dozen of the more prolific writers. For those who write short stories, Gonzalez creates five characters and a single location, and all submissions must be based on those criteria and fall between 10 to 20 pages.

“The writing submitted is very good,” Gonzalez said. He is currently working on starting a newsletter to showcase the writing as well as some artwork from detainees.

“Every week more and more of the detainees are submitting entries, and they can’t wait to hear the next theme,” he said. “Some of my coworkers started kiddingly calling me ‘El Profe’ — ‘The Professor.’ But I’m just a detention officer with a vision to help these detainees in a unique and special way.

“To make a difference in the lives of others, you have to treat them with dignity and respect,” he added. “This program, and its creative outlet, gives detainees the opportunity to express themselves in a healthy manner, with the goal of making a safer and more productive workplace. It’s gone far beyond anyone’s expectations.”